MZ have announced on their official blog some acknowledgement of the recent ‘boycott’ activity in almost all kingdoms.  The full detail is here.

This is as a response to an immense outpouring of dissatisfaction across many kingdoms.  Stayalive clearly kicked it off as announced on his instagram account, and as posted on this site here yesterday.  http://www.insidegameofwar.com/stayalive-boycotts-kvks-until-further-notice/

But since then, the level of activity has been pretty astonishing, with just about all kingdoms having some form of mass protest.  One of the most impressive is Kingdom 442 – Melba, which has arranged their own open letter to MZ with their list of complaints and suggestions.  And what is clearly obvious, is that the list is a lot broader than the ones addressed by MZ in the above blog post.

Yes, it is fantastic that app loading times are better, that leaving and entering the game is much quicker.  We doubt there are too many people who have complained about the speed of leaving the game.  On the contrary, the speed of startup of the app only really matters in the situation where the app has CRASHED, and the user has been booted out of their account due to some unknown bug.  This is what a large proportion of the complaints are about, having their app crash when being soloed, or rallied, or when trying to equip a hero gear preset when leading a rally.  And when the first thing that pops up when you load the game is a gold pack sale screen (creating 1-10 seconds of lag / freeze in which you can’t do anything), not too many people care appreciate having their chance of shielding / teleporting / equipping a preset delayed whilst MZ downloads the latest gold pack sales graphics.

The full 3.8Mb file which is 4190 x 2608 pixels of photo merging is posted on flickr as below.  Click on the image below to go to the full flickr version.  You can zoom in and around pretty easily, and read the full list of their concerns.  Of course, you can also go to 442:256:512 to see what it is like now.  Reminder, you can’t click on the cords to open the game.  😉

But you can click on the below photo to see it in all its glory. 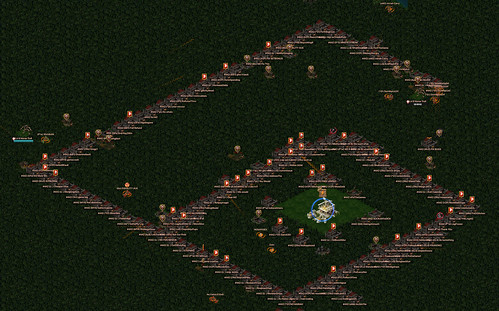 If you have examples of kingdom protests like the one above in Mabel, please let us know by sending an email to contact@insidegameofwar.com.  Screenshots would be fantastic.

May we all live in interesting times.

Prepare For The Super Wonder

Hail, warriors!   A challenge like no other awaits you and your armies. The Super ...